The ENSA General Assembly 2012 took place in Treviso between the 19th and the 21st of March.

This General Assembly was organized in the framework of the European year for Active Ageing and International Solidarity has been held in collaboration with the Elisan network. These three-days event, hosted by the City of Treviso, had the objective to strengthen the dialogue with the European Institutions, to build European partnerships, and to stimulate the active participation of Local Authorities in innovative European projects.

Furthermore, contributions to the topics of the European Year 2012 on Active Ageing and Solidarity between Generations have been collected and encouraged. In addition, as a specific contribution from Elisan, two call for awards have been illustrated: one on the field of fighting against the Alzheimer, the other on the topic of energy poverty. 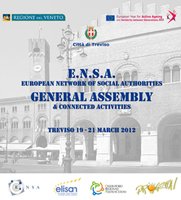